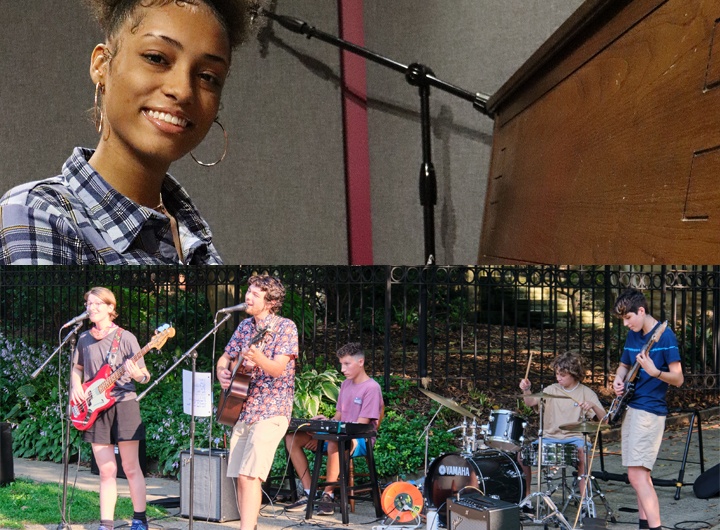 Listening to “Can’t Stop” you would never guess that Ajonia is shy, especially since she calls the song “delicate but saucy.” Yet she’s at home in the Lighthouse booth with producer INEZ, her songwriting partner, who helped her find just the right vibe. Ajonia pulled threads of confidence and empowerment from “Hurricane,” by The Weeknd, Kanye and Lil Baby, coupled with a love of R & B from Summer Walker, Jhene Aiko, Lucky Daye and Kehlani. Yet this sound is all her own as she invites: “Hop straight in my bag, straighten out my crown.”

The “saucy” moniker fits her perfectly as she is just as happy working on her culinary skills in the kitchen as she is singing. “Be on the lookout for me as I record more,” she teases. “I’m really enjoying this.”

Some of the best songs seem to come from thin air, when the artists don’t even know how they appeared in their brains. A book? Maybe. Such is the case with “Home Free,” which started as a ukulele piece in Nina’s head at least five years ago. Since then, the whole band joined in on the arranging, including drummer Nate, who synced his sticks with the bridge vocals “Thum Thum Thump.”

“My only enemy is my own energy,” is the call. Behind it, influences from Paramore, The Wombats and Sara Bareilles, who also has a theater pedigree.
Although this recording features Nina on bass and lead vocals, Nolan on acoustic guitar and vocals, Ellie on electric guitar, Graham on keys and Nate on drums, each musician plays other instruments as well. Dana Cannone brought it home. “He was super helpful and understanding,” the band says.

When AndMore was looking for the perfect band name for its “theater music meets folk music meets rock music” sound, they saw a poster created for one of their shows, with a list of all the participants. At the bottom it said: “AndMore.” How cool would it be to be on a poster that said “AndMore, and more!” And that, as they say, was that.