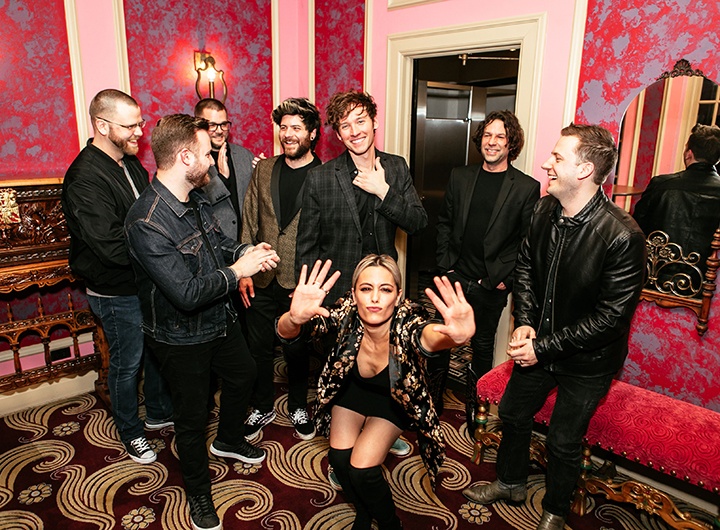 The Vindys have quickly become one of the most sought-after premier bands in the Northeast Ohio/Western Pennsylvania music scene. With their unique blend of alt-rock, pop, and jazz, The Vindys have garnered a following that has seen them captivate audiences all across the country. Cleveland Magazine raves that The Vindys "remind us of the Black Keys", and “make us want to dance, whether we’re in a grimy dive bar or a field in Lake County”. Their versatility and incomparable style is one of the many reasons why The Vindys are a rare and unique must-see musical act.

The Youngstown, Ohio-based band is led by frontwoman and songwriter Jackie Popovec, a vocal powerhouse with a voice that exudes confidence and sex appeal. Jackie’s voice and charisma help set the stage for the rest of the band, which includes John Anthony on lead guitar, Rick Deak on rhythm guitar, Matt Jackson on bass, and Ed Davis on drums. All are classically trained musicians whose skills combine to create an intricate and enjoyable sense of depth and maturity in the band’s music. The band is rounded off by keyboardist Nathan Anthony and The Youngstown Horns (consisting of Kyle O’Donnell on trumpet, Tim Harker on saxophone, and Brian Mayle on trombone).

The Vindys are passionate about representing the city of Youngstown as a place where the music scene is thriving, and pay homage to their roots in the band's name by drawing influence from Youngstown’s daily newspaper, The Vindicator. Brad Savage, program director of The Summit 91.3 FM, explains: “To me, they really personify Youngstown and Northeast Ohio. They’ve got depth and substance and are instantly likable. Their songs get stuck in your head after just one listen.”

The band has performed at various festivals including WonderStruck (formerly LaureLive), Winnetka Music Festival, and Summerfest, where the band won the first day of the Emerging Artist Series contest as voted on by the fans. The Vindys have shared the stage with national acts such as Pat Benatar, Rick Allen of Def Leppard, Orianthi, Rita Wilson, Allen Stone, The Drive-By Truckers, Hunter Hayes, Marty Stuart and many others.